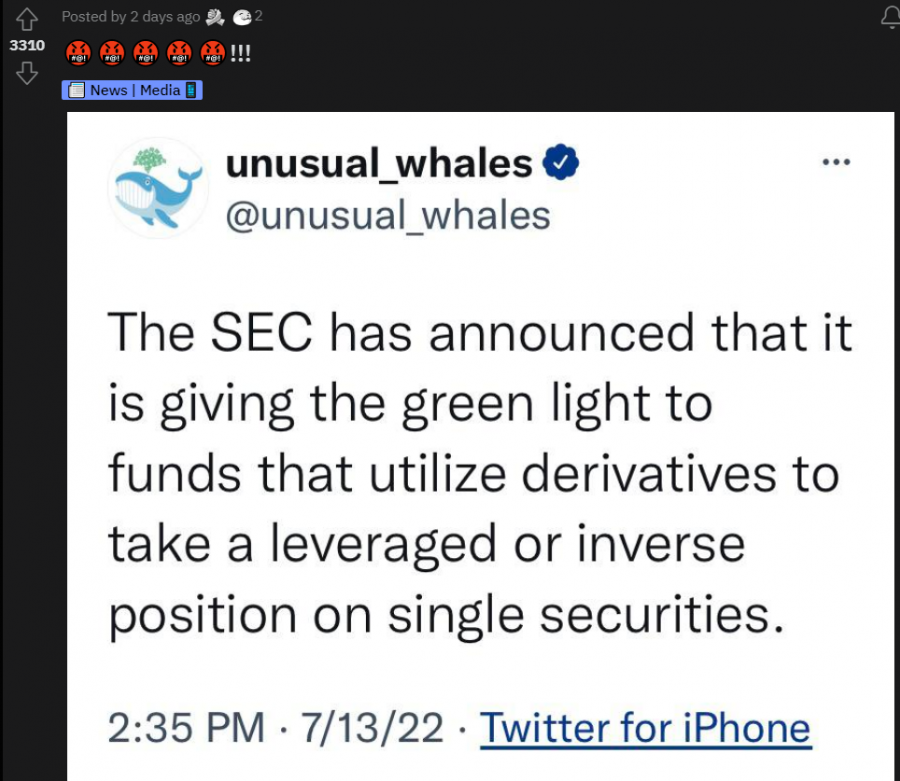 So the SEC just approved SINGLE STOCK ETFs for shorting with leverage.

Which is a retarded way to say that you can short a stock indefinitely for diminishing returns.

Sure this is tailored for ‘certain investors’ or some shit, per the SEC,

What fund would be solely just ownership of one security? What the fuck?

How would the SEC greenlight and approve such a risky and or manipulative vestment vehicle? Like it’s obvious that if you use this as intended, it would be stupid risky. So the only recourse to not risk is to manipulate, and ETFs are a lot easier to manipulate due to the nature of reporting.

Even if these new vehicles were considered ‘ETFs’. If you know anything about ETFs, it’s that they have zero accountability and aren’t transparent or accurately indicative of anything. It’s not a even a basket that makes sense. ETFs are total scams.

So these ‘unique features’ are just work-arounds for racketeering Market Makers and the Financial Gooney-likes to once again rig the system.

Are not happy with the SEC’s decision in making these Single-Stock-ETFs,

Some have even took the clown approach;

Because why the fuck would you make an ETF with only one stock? Wouldn’t it be better to buy or directly short the underlying asset?

Obviously people want to use an ETF to create layers of complexity to hide their play.

And a lot of people are right in their reservations to say things like;

or a post about some comments saying how dumb this is;

And yea, Fuck the SEC.

Soon after the SEC allowed for this,

There was a Tesla Short ETF created specifically for shorts to offset their shorts into this basket, like. What the fuck;

Like, I get it, bill gates probably has about billions in short positions against Tesla, but for this basket to come out so quick after the SEC just greenlit the program. It’s awfully sus. (or it could be very risky/good business acumen from a daring and bold custodian)

And for the Media to pick up with random attack articles,

They’re going ahead and -once again- attacking the Self-Driving thing.

Because of the news of this guy leaving, it’s convenient timing;

Here’s another shit post by a so called ex-employee;

It’s just convenient timing. It could all be a coincidence, but it seems primed for another bear raid slow-style.

You already know that these short motherfuckers are going to -yet again- bet against Tesla. I mean, they have for the past five+ years, why would they stop?

That’s my opinion, besides random other internet users,

But they (SEC) also approved for the obfuscating audit trails by limiting CATs until July 31, 2024. Yep, that’s two more years from now. No need to see those transactions.

So, these transactions for the above shit I mentioned will be hidden. It’s not that they don’t exist. It’s that you don’t get to see them and they won’t be publicly audited by the SEC.

It’s almost like the SEC is just a fucking financial goon helping out it’s Racketeering friends gamble in decadent degeneracy.

I just want you to know, that the next market collapse, blame the so called ‘old guard’. They were one hundred percent complicit. At this point, the only thing they’re guarding is their way of life.

The SEC is a scam.

ETFs are a scam.

So, you best believe that -that too- is a scam.

All of this is retarded.

And the SEC is making it easier for the big players to hide their actions by delaying the audits. Like what’s the point of the SEC if they’re just going to be some backwards ceremonial entity that ‘om-nee-dom-nee’ allows illegal shit to happen in these skewed and fake capital markets?

It’s a Dog and pony show by any other name.

*Not Valid Financial, Legal, Life, or Any Advice

This is a thing,